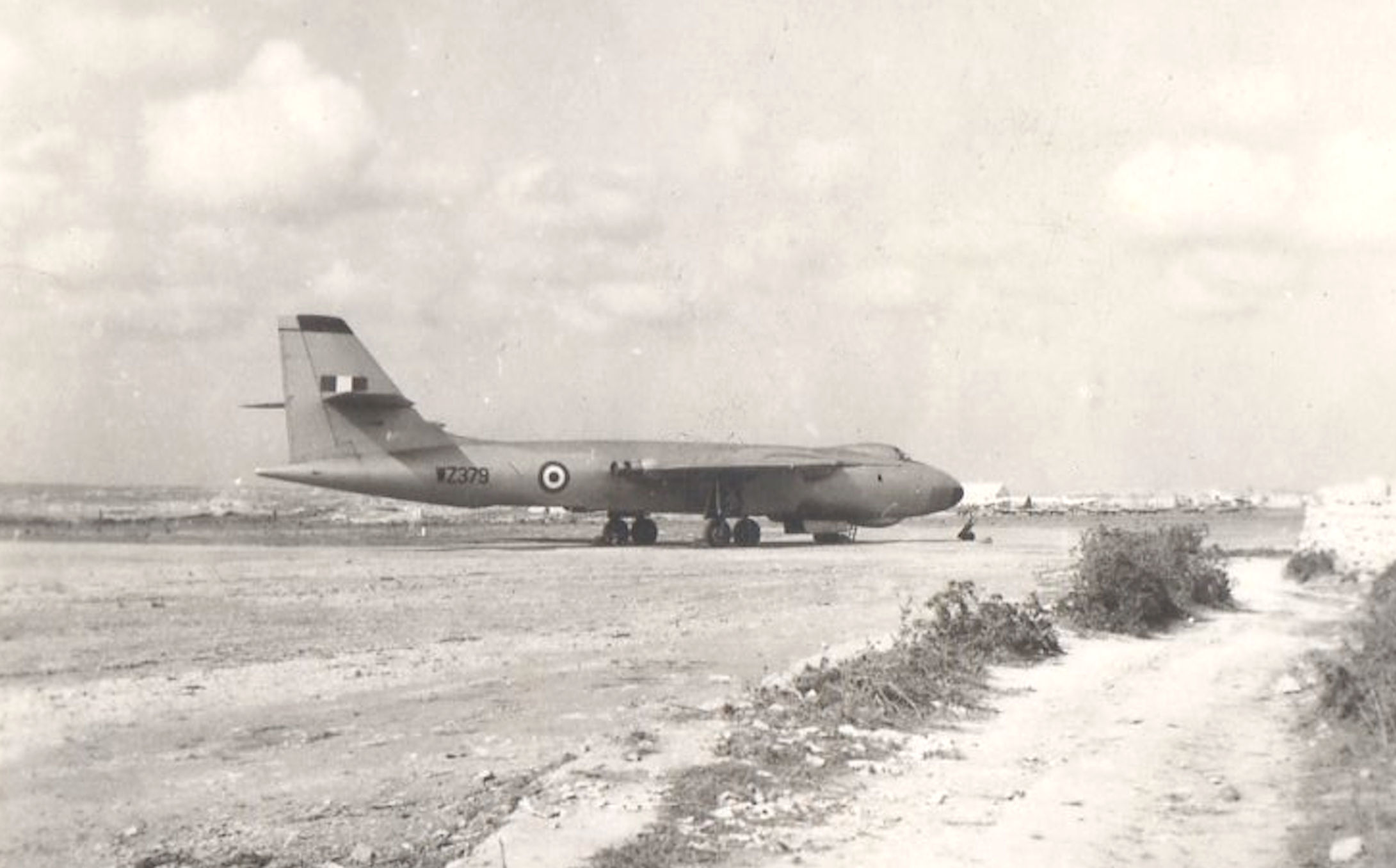 This aircraft was the first to fly non-stop from Marham to Cape Town, South Africa on 9 July 1959.

The pilot was Sir Michael Beetham. He and his crew returned to Marham on 14 July 1959.

In error, the Squadron ORB states the flight number as XD861.

Source : Rowland White, the author of the book Vulcan 607' the epic story of the "Black Buck" bombing operations against Port Stanley airfield in the Falklands War and Nightjar Newsletter Winter / Spring 2007

Alan Barnett writes :
My father was a Chief Tech/Master Tech at RAF Marham, Norfolk, UK, during the early 1960's. To my knowledge, he served on two aircraft: XD858 & XD869, both Vickers Valiants.

XD861 was in Capetown the same time that Sir Michael Beetham made his historic flight non-stop from Marham to Cape Town in XD858. It was carrying spares needed to repair a fault with XD 858's undercarriage.

Source : Rowland White, the author of the book Vulcan 607' the epic story of the "Black Buck" bombing operations against Port Stanley airfield in the Falklands War and Nightjar Newsletter Winter / Spring 2007

Flew into the ground on takeoff. Crashed 2.5 miles North East of RAF Marham. Night takeoff on a trip to Nairobi. All 6 crew members were killed.

Ian Andrew states "There were 6 seats in a Valiant, two ejector seats for Captain and Co-pilot, 3 rear facing seats for 2 Navigators and 1 WOP/AEO. There was a 'jump seat' that was used by the Crew Chief on the occasions that he was needed to fly in the aircraft."

According to "Vickers Valiant - The first of the V-Bombers" by Eric B Morgan, (Aerofax 2002) the Valiant was lost for tailplane linked reasons.

XD869 Crash at Marham by Ian Andrew February 2009
"I was serving on 214 Sqdn when this event occurred. I was a 22-year-old, Cpl. Air Radar technician at the time. I had joined the Sqdn. In February 1959.
The Sqdn was engaged in an ‘Exercise Sunspot’ for 6 weeks. Most of the A/C and personnel, including myself, were in Malta at RAF Luqa.
XD869 was scheduled to carry out a 'Lone Ranger' flight from RAF Marham to RAF Eastleigh (Nairobi). This would necessitate in-flight refuelling from the tanker A/C operating from Luqa.
I was assigned to the night shift that was to pre-flight, see off and then see in and after flight the two tankers operating from Luqa. I cannot recollect the time that the shift was scheduled to start, but it was brought foreword and we were summoned from our accommodation about an hour early. We were told that this was because the weather at Marham was deteriorating and the schedule had been advanced to beat the weather.
I was the only Radar Fitter on the shift so I had to do both pre-flights. I had completed the inspection and signed the F700 of one A/C and while I was carrying out the 2nd pre-flight, one Cpl Greaves, an Armourer, came to the A/C to tell us that flying was scrubbed, ‘because of the weather at Marham’.
The shift then closed up the A/C and put the bung’s in the engines etc. And we went to an unexpected early night in bed. I believe that this was about 02:00 local time.
The following morning we were awakened by a very noisy day shift. This was most unusual as day workers normally respected the night workers rest period. They had heard on the radio that a Valiant had crashed at Marham.
We immediately assumed that this was why ‘our’ flight had been cancelled, awaiting an investigation. The next we knew was when the morning newspapers arrived by civilian airline. The casualties were named in one paper; this told us that it was a 214 Sqdn. Crew. The Crew Chief named was Chief Tech Bob Sewell. Bob was the Crew Chief of XD858, so we assumed that it was this A/C that had crashed.
About mid day, we had a Valiant fly in from Marham and we were assembled for a briefing where we learnt that the A/C involved was XD869.
All of the above are my recollections of the night, what follows is what I gleaned later, so I suppose it is hearsay, but it is 1st hand hearsay from other Sqdn. Members.
As was normal for ‘Lone Ranger’ flights, two A/C were prepared and two air crews readied. Because of the schedule being advance very close to ETD. The spare aircrew did the A/C ‘walk around’ while the prime crew attended their briefing.
On ‘Lone Ranger’ flights, where the Crew Chief was flying in the A/C, another Crew Chief was assigned to do the actual seeing off. In this case Bob Sewell was the ‘other’ Crew Chief. The Crew Chief of XD869, whose name escapes me, was suffering from a heavy cold or ‘flu, so asked Bob to take his place on the ‘Lone Ranger’. Bob went home to his family in Married Quarters to pack a bag and promised to bring home some pineapples for his kids. The ‘Lone Rangers’ to Eastleigh were known as ‘the pineapple run’.
I know that the person that did the Radar pre-flight was one Cpl Mick Dunn, as he later told me how worried he was about having done a pre-flight on an A/C that crashed. Mick later became a navigator and was commissioned. He came from Leeds.
The Officer Commanding 214 Sqdn at the time was Wg. Cdr. Mike Beetham DFC, he later became Chief of the Air Staff, Marshal of the Royal Air Force Sir Michael Beetham GCB, CBE, DFC, AFC, DL, FRAaes. He is still alive, albeit now in his 80’s."

Peter Walker writes:
"The crash of Valiant XD869 occurred almost exactly 12 monthas after I had left the RAF. It was very sad for me because I was on the groundcrew of this aircraft working in Chief Tech Sewell's team. Indeed I had flown a couple of times in XD869, including some of the early air to air refuelling trials in 1957/58. The morning of the crash I had to travel to Kings Lynn and knew nothing about it until just passing Swafham off the A47 there were the remains of a Valiant burnt out in a field. As far as I can remember it was some weeks after that I found out that it was XD869, my old aircraft".

Alan Barnett writes about his father Edwin "Barney" Barnett :
Mr Sewell was a close friend of my father. My father was deeply affected at the time of the crash owing to the fact that he was originally scheduled to accompany that flight as Chief Tech. Bob Sewell offered to take his place on what was known as a "pineapple flight" since my father was suffering from a heavy bout of 'flu & was unable to fly.

Crew of Valiant B Mark I XD869 consisted of :

Alan Barnett writes :
My father was a Chief Tech/Master Tech at RAF Marham, Norfolk, UK, during the early 1960's. To my knowledge, he served on two aircraft: XD858 & XD869, both Vickers Valiants.

Crew of Valiant B Mark I XD869 (Date unknown) consisted of :

The ranks and roles are not known at this time.